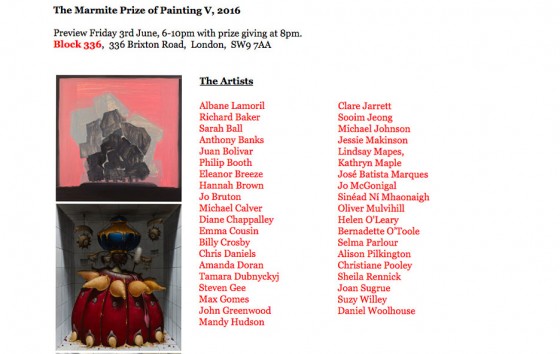 The finalists of the 2016 Marmite Prize for Painting have been announced, with 39 artists selected to take part in its fifth edition.

Their work will feature in an exhibition hosted by Block 336 in Brixton and Highlanes Gallery, Drogheda, Ireland.

The prize will have one main winner, two runners up and a student prize. These will be chosen by a judging panel which has also been put together using an open call. Suggestions were sought for three painters based in the UK and Ireland to join last year’s winner Brian Cheeswright, with Phillip Allen, Vanessa Jackson and Mark O’Kelly chosen.

The Marmite Prize for Painting was set up in 2006, with subsequent prizes running in 2008, 2010/11 and 2012/13. The aim of the prize is to promote artist communities and networks, locally and nationally, connecting artists through the touring exhibition and related activities. Past winners of the prize include Iain Andrews, Dai Roberts and Michele Fletcher.